Nepal is a landlocked gem, sandwiched between India and China, located in the Himalaya (“The mystic land of Yetis”).The country fascinates with mesmerizing mountains, rich cultural diversity, magnificent temples, artistic shrines, and inspiring natural scenery. Due to its geographical diversity, Nepal is one of the best travel destinations in the world. Whatever action you love to do, in Nepal you can do it! The choices to embark to a lifetime experience are endless. Either you climb high mountains, trek between the world’s tallest mountains, go for a Safari ride, mountain bike in the core of the Himalaya, raft on the wild rivers, explore the UNESCO World heritage sites, the experience is indescribable.

Bhutan is well-known for its dramatically varied topography. It boasts a great diversity of awe-inspiring landscapes of snow-clad mountains, lush valleys, dense forests and rushing streams that are considered to be abodes of the gods.To the south lies India; to the north Tibet. Having only opened its doors to the tourism in 1974, Bhutan has remained relatively isolated from western influence and enabled to maintain a rich traditional based Buddhist culture.

The autonomous region of Tibet is located at the main part of Qinghai-Tibet plateau, south-West frontier of China. Tibet borders with Sichuan, Yuannan, Qinghai
and Xinjiang; to the south contiguous to India, Nepal, Sikkim, Bhutan and Burma, and bounded by Kashmir on the west. Open grassland, virgin forest, Tibet is also home for some of the world’s tallest mountains, with several of them making the top ten list with Mount Everest: the highest mountain on earth. With its particular dry climate, Tibet is worth a visit almost all year long. April to November are the milder months.

A splendid Nature, a history of several thousand years, an identity like no other: the Alps. Are you dreaming of a new experience? Climbing a 4000-metre high peak, enjoying a meal at a timeless bivouac or admiring the high peaks on a journey of several days’ walking. Excited of spending the summer in the mountains?
Discover this true natural gem with WILD YAK. Whether in Switzerland, France or Italy, WILD YAK takes you off the beaten track.

Love love love! Have you ever dreamt of going trekking in Nepal? If you have never done trekking in Nepal, then you certainly miss a magical experience in your life. However, many people assume one needs to be strong, physically very fit, and have a long holiday to go trekking in Nepal.

Open grassland, virgin forest, Tibet is also home to some of the world's tallest mountains, with several of them making the top ten list. Experience an authentic discovery of the highland of Tibet by foot. Mount Everest: the highest mountain on earth in the background gives a special taste to your adventure.

In the Himalayas' heart, landlocked between India and Tibet, Bhutan offers many possibilities for trekking off the beaten track that will leave no one indifferent. Due to the country's policy of isolation, there is little traffic on the trekking trails. With 70% of its territory covered by forests

The Himalayas are a treasure trove of traditions and culture. WILD YAK EXPEDITIONS offers a wide range of guided tours to enjoy the charm of these local treasures. Discover our cultural tours or contact us for a customized cultural tour, we will be happy to advise you!

In the last few years, Manaslu climbing in Nepal has become quite popular among the 8000 peak dreamers. The most preferred route in the Manaslu expedition is the North-East route. This is also known as the normal route. There are some excellent reasons for its popularity. Such as easy access to the Base Camp. Good summit ratio. Active rescue in case of emergency, and of course concerning the price too. Since the Chinese Mountaineering Association has increased the climbing permit fees by 50%, most of the Cho-Oyu and Shishapangma climbers are attracted to Manaslu as an alternative.

Manaslu climbing in Nepal according to my thoughts

I was five times in Manaslu Expedition and summited two times. Here are some personal thoughts about Manaslu climbing in Nepal based on my experiences. 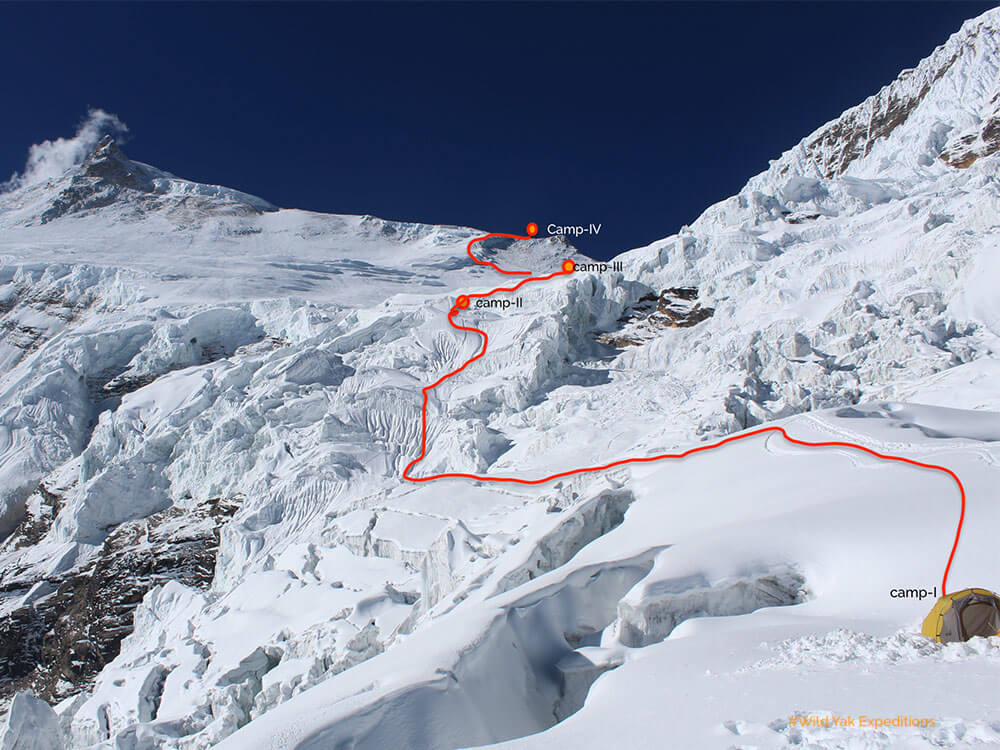 In general, if we look at the 14th 8000-meter peaks climbing ratio, Manaslu is not about extreme climbing. But that doesn’t mean it is not a tough mountain. All 8000er mountains are incredibly challenging and retain a high risk of calamity. Besides an excellent preparation of the logistic, Manaslu climbing requires immense physical fitness and excellent endurance capability. On the summit day, one must be able to walk 10 to 12 hours between 7400 and 8163 meters.

Sometimes the weather can be blizzard during the summit day. Manaslu climbing has some crazy and sad stories about climbers who get lost in the wide summit plateau vanished forever. So, if you are planning to climb Manaslu, I suggest that it is essential to check if the given package includes also an accurate weather forecast or not. The Wild Yak Expeditions Team receives the forecast from professionals (not by free online provider). This has contributed a lot to our Manaslu expedition summit rate. Check the Manaslu climbing program and services included for 2021.

Which season is good for climbing?

Manaslu climbing in Nepal is utterly different according to the season. I was two times in Spring and threes time in Autumn. What I found that is Manaslu receives much more snow in the Spring than in Autumn. This makes it even harder to climb in Spring than Autumn. Likewise, frequently covering the tracks, breaking off the tents, lightning, often avalanches around the area creates an exhausting situation. Therefore, I suggest Autumn if you have an option. The Manaslu summit static also shows that most of the summits are in Autumn and very few in Spring.

What kind of climbing I will face?

Manaslu climbing in Nepal does not require an advanced mountaineering technic or training. But it needs a good knowledge of basic climbing and confidence of climbing vertical walls of around 100 meters of 50-60 degrees between Camp-I and Camp-II. It is then followed by a couple of short steep climbing sections. Also, you might confront 5 to 8 meters of ladder walking on the icy fissures with the crampon shoes. This could be a bit stressful the first time.

During the whole route, the most adrenaline part is thus between Camp-I and -II. The route is plenty of crevasses and icefall with a traverse beneath a gigantic serac hanging above the black rock wall. One should be mentally fit to overcome this part. 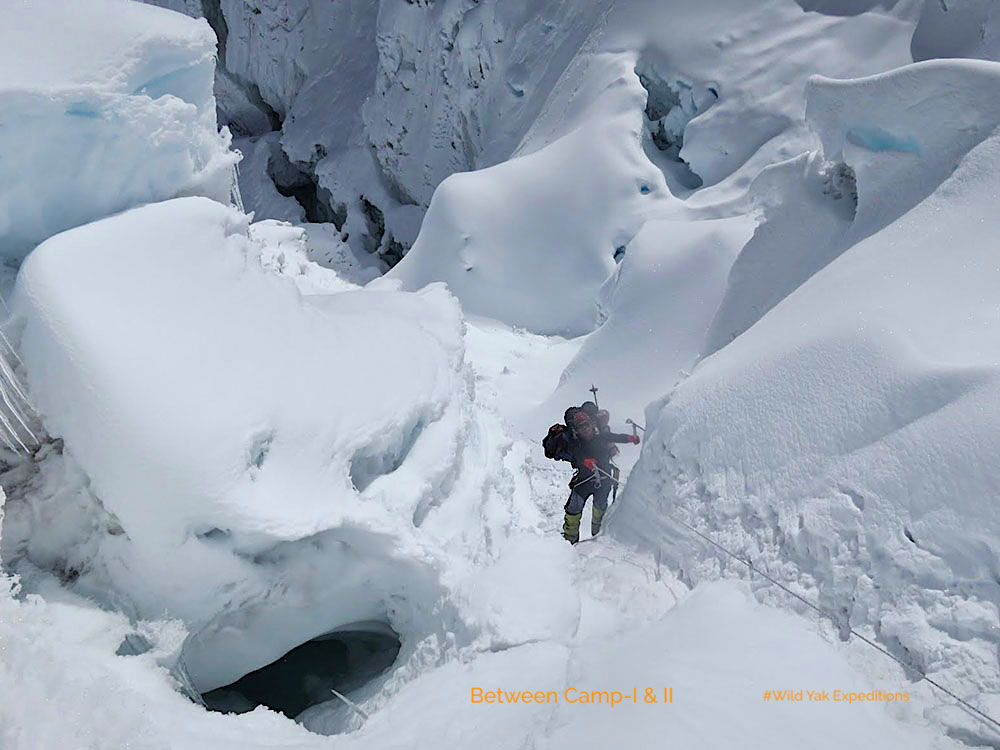 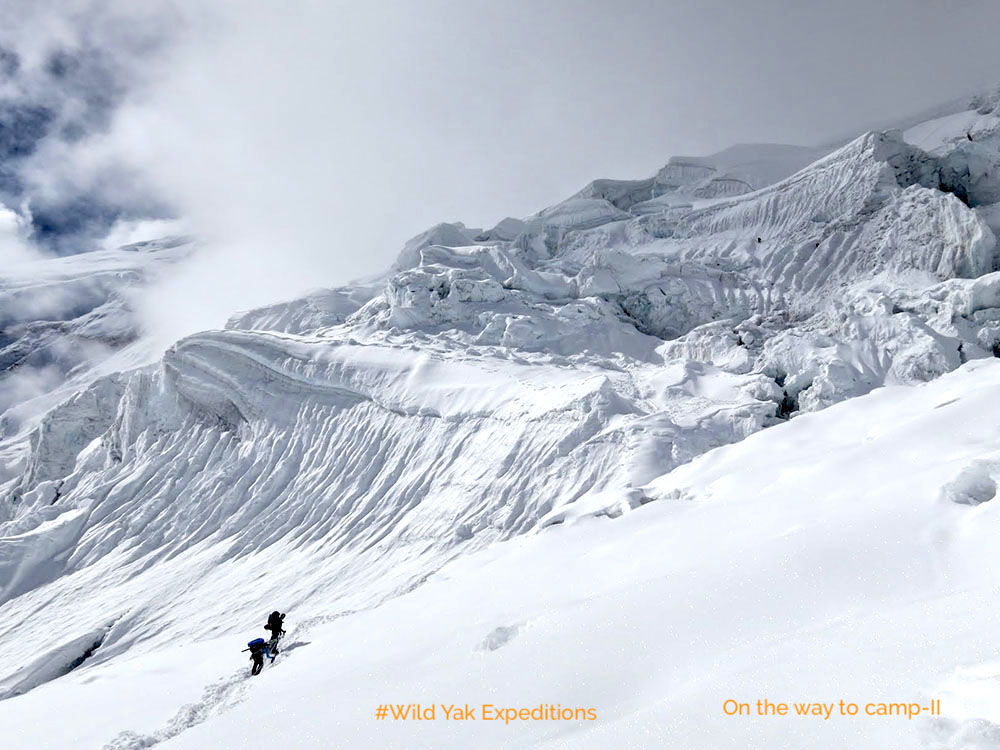 What I highly suggest, is to first climb one of the numerous 6000 meters peaks in Nepal before putting lots of money and time into an 8000-meter peak. Ascending a smaller mountain will familiarize you with the culture of climbing in the Himalayas. It also gives you a clear understanding of your performances in altitude, which can help you for the future climb. For a good reason, I think that the Island peak is perfect for a first experience. It is a good mixture of glacier walk, vertical wall climbing, slim ridge traverse, 10-12 hours of endurance, and sometimes ladder walking as well.

During Manaslu climbing in Nepal, the shortest distance climbing is between Camp-II and -III. It is a straight walking up to the col of Camp-III. The new route is taken more from the right towards the North peak. After the tragic avalanche accident in 2012, the new route is much safer.

The route to Camp-IV continues with a straight 30-40 degree climb of 400 meters. And another 300 meters climbing through icy slopes before traversing to Camp-IV. Summit climb is more like a glacier walk, where you need to cross three big plateaus and then 100 meters ascend towards the summit ridge. From the summit ridge, the final climb is on a slim ridge which is approximately 60 meters straight to the top. Only two people can hold on to the summit. 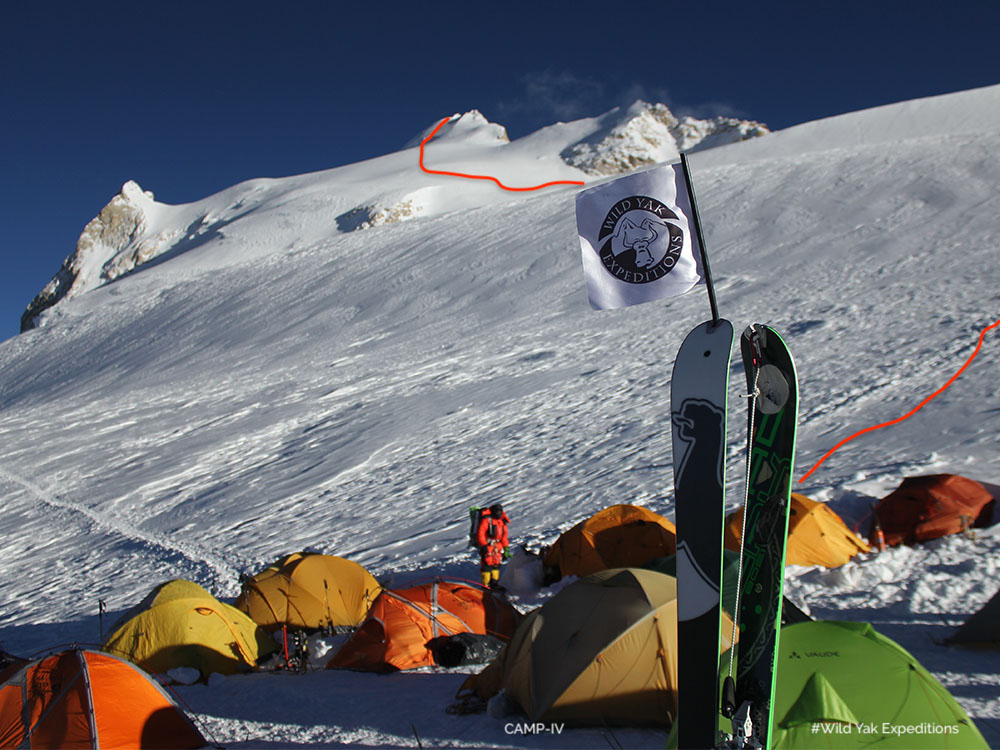 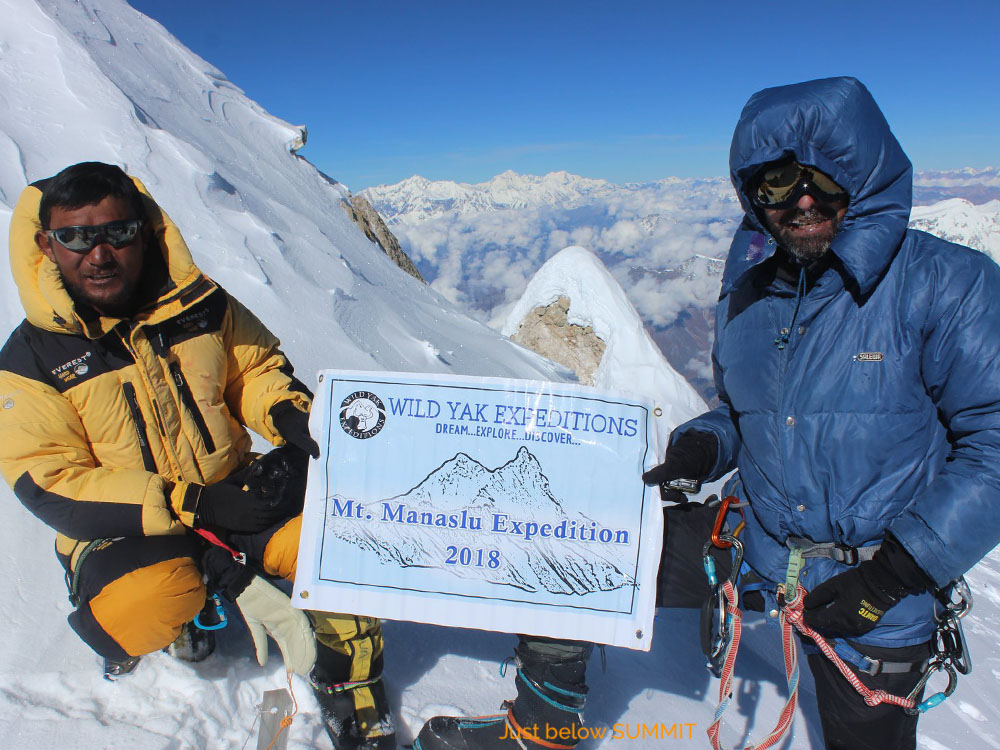 I hope this information will help you to prepare better for your ascent. Check out what kind of preparation and material you need to climb Manaslu

Wild Yak Expeditions confirms its departure for the 2021 and 2022 Manaslu Expedition with a small group of maximum of 6 participants, competent and experienced Sherpa climbing Team. Check out what is new in the service of 2021 and other 8000 meter peaks fix departures. 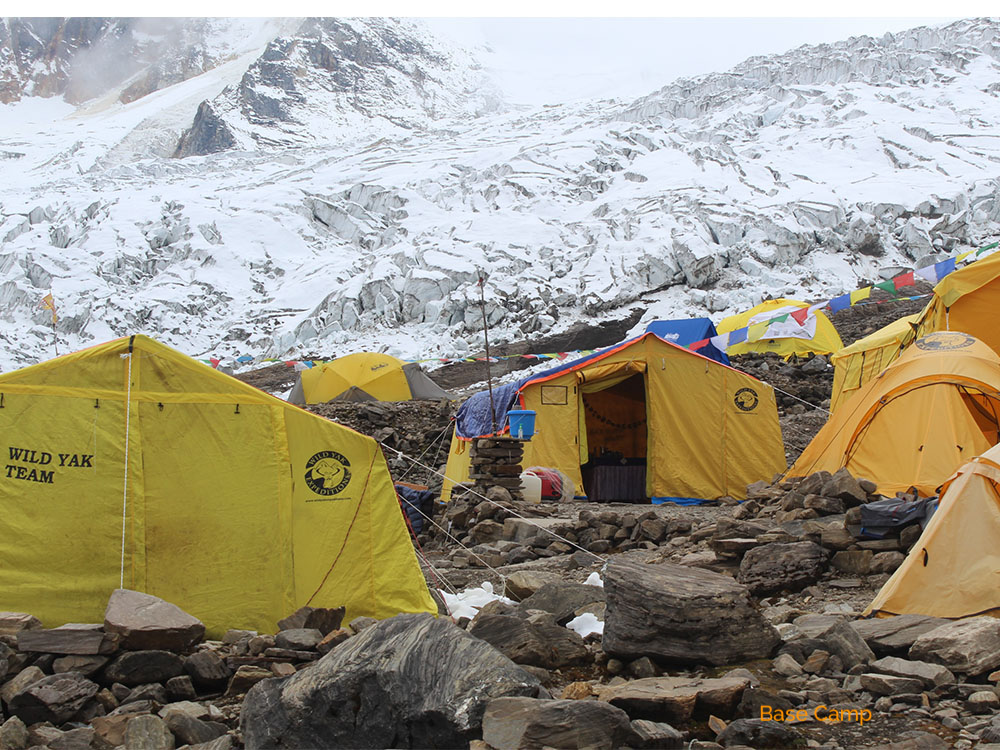 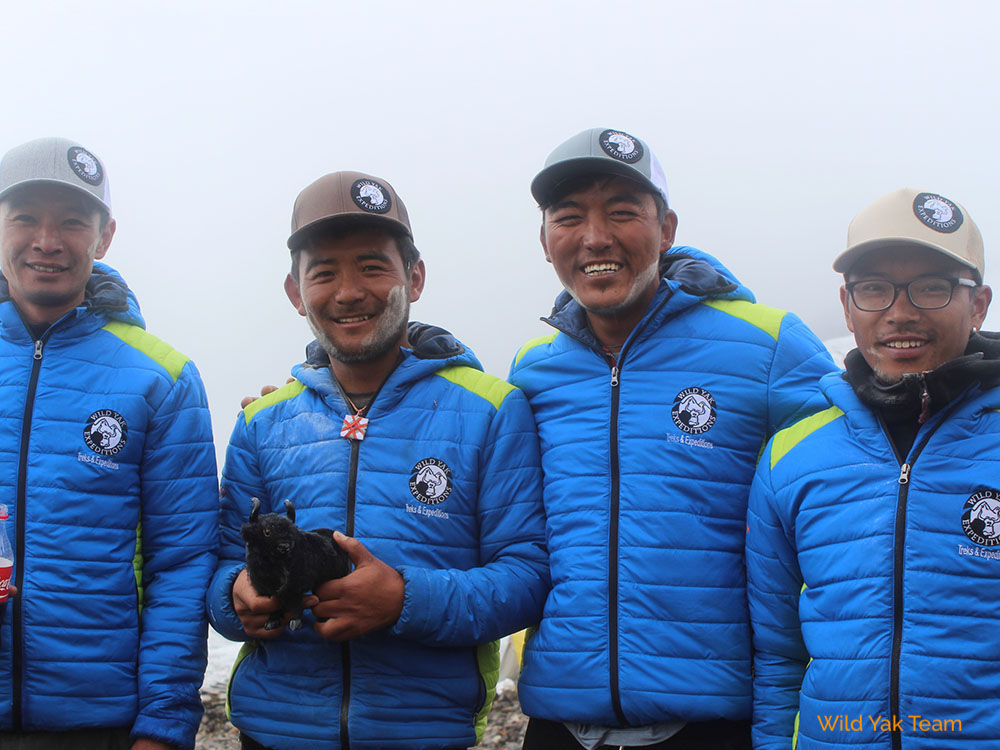